Welcome back fellow dwarves! Somehow we're on week 49 of this project, and we've got so much to catch up on. This (version 1.1.9) has been the longest/biggest patch so far.

First of all, I'm really excited to announce that we've partnered with Gameclaw Studio, creators of Regions of Ruin (which you might also like). Partnering with these awesome guys will let Beneath the Mountain increase the size of it's scope, and deliver a bigger, more polished final product. We're looking at a mid-2022 release date, and with the following scope changes:

We finally have the completed version of our new background art. Now, we may re-do this piece one more time (due to publisher partnership), I'm really excited to have this amazing piece finally done. Shoutout and thanks again to Rigo for his amazing work.

I've been waiting to add this feature for soooooo long. Throughout the map you can find holes (that drop into an endless abyss), underground water pools, and of course, lakes of lava. These new features add a lot of visual flavor to the game, and force you to either build bridges to cross them, or work around them. (Also, anything knocked into the holes/water/lava will fall to its death!) 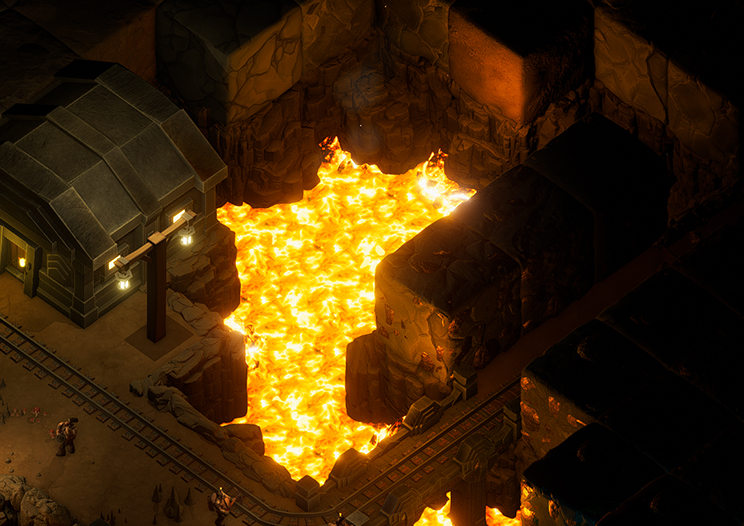 As soon as we introduced the hole systems, I realized we'd need bridges to cross these gaps. So, we added wood bridges (for holes and water), and stone bridges which are the only type that can be used to cross lava lakes. Also, as you can see from the screenshot above, you can build rail across the bridges, which is a very useful feature! 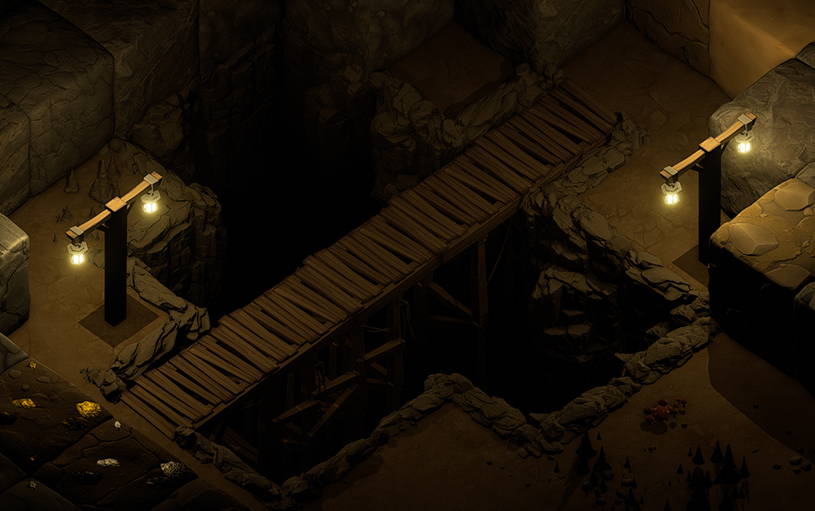 Even though the focus of this last patch was on other features, I still found the time to add two new creatures, the Behemoth (left), and Lich (right). The Behemoth is a purely physical challenge with enormous health pools and attack damage. The Lich currently only provides a powerful ranged auto-attack, but when we add unit abilities in the next patch, the Lich will be an incredibly formidable foe, teleporting to random locations, resurrecting fallen undead units, casting curses, and much more.

There was one last exploit left in the game, which was using spear traps (not pictured) to wall off incoming invasions. With the trap overhaul, all wall traps require a rock cube to be present, which eliminates this final exploit. Additionally, I took some time to overhaul the visuals of all of the traps as well as adding a few new ones. 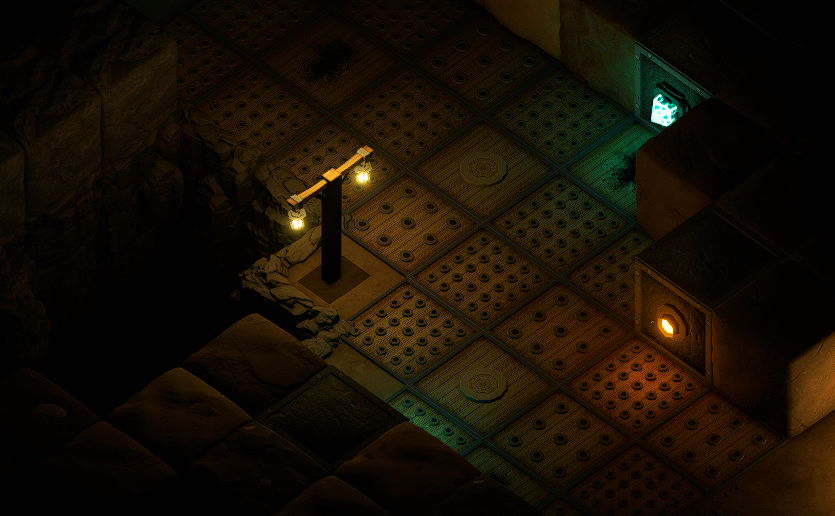 This is another feature I've been itching to add for a while. As you can see from the screenshot below, blood splatter really makes it clear where a battle has been. Additionally, sometimes when a unit runs (and gets hit), you can see a trail of blood splatter leading away from the battle, which is pretty cool. 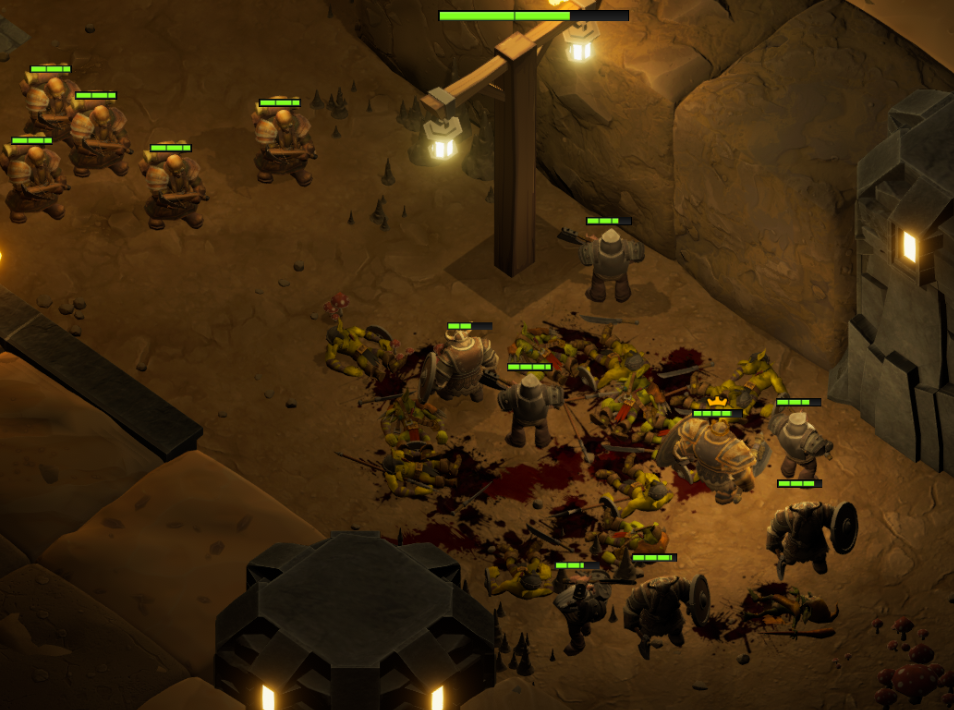 Heart of the Mountain Improvements

The Heart of the Mountain is the precious gem that you have to reach to win the game. This point isn't illustrated (at all), in the previous build, and so I wanted to fix that in this latest release.

The HOTM is now located within a lake of lava (seen below). You can only reach it by building a stone bridge to its center. Lastly, the cave is surrounded by tons of some of the strongest creatures on that floor.

I've also added a small into-sequence which explains the HOTM using the Advisor (seen below). We'll be seeing the Advisor more as we add more tips and tutorial stuff.

Both the Workshop and Forge received visual updates, and became much smaller and cheaper. This makes them much easier to use. Also, the wall received a very nice visual upgrade, and the Tower is back (although it no-longer shoots flaming arrows). I plan to add the ability to garrison units inside towers at a later point. 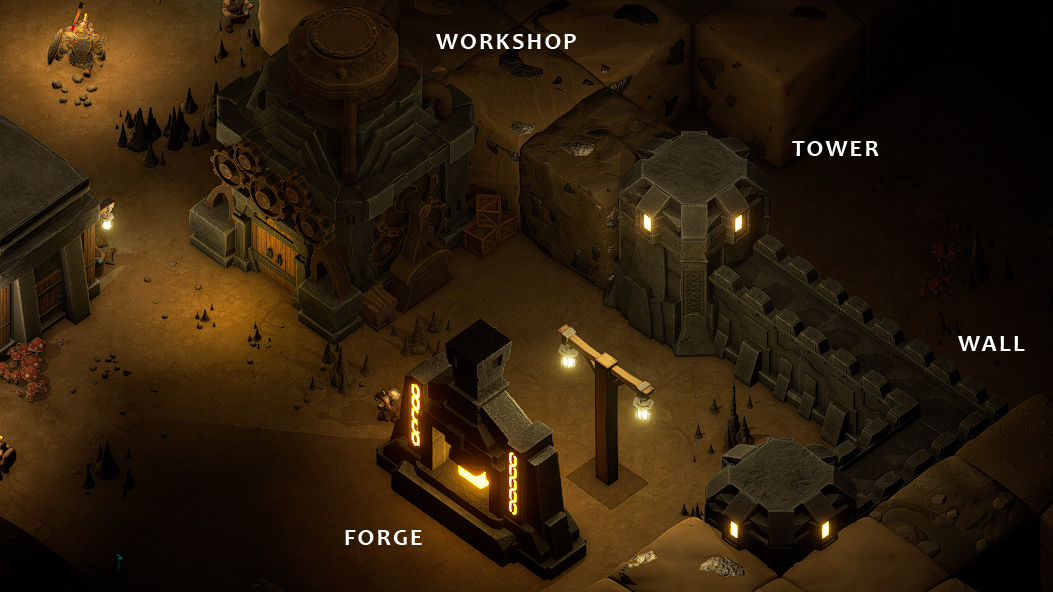 Finally, you can see what the stats are of each unit, so you can make better decisions about which units to train!

I added the unit selection UI to make it easier to select units of a given type from anywhere. A single click would select all units of that type on the current floor. To select all units of that type (on all floors), just double click the icon. So, lets say I want to round up all my military units, just hold shift, and double click on each military unit type. This really helps with unit management ( as well as showing you a count of current units).

I want each session of BTM to feel different from previous runs, so I added a lot of randomization to the way the starting room, and the entrance tunnel are shaped. You'll find that the tunnel curves, as well as the shape and location of your starting room, are never the same. This keeps things interesting at the start of the game.

It took me a while to add this feature, but I'm really glad I did. I've (finally) made it so that Engineers run from enemies ( a much requested feature). I've also added it to some cave creatures (like spiders), which makes those fights much more interesting! Also, goblins flee on low health, making the first few waves a bit easier.

Believe it or not, SSAO is not easy to do when you're using an orthographic camera..... but we managed it! Check out the difference in the gif below. Also, this setting (and many others) can be adjusted in the options UI.

Sadly this is our final public build on Itch.IO. I think we'll continue to do news and updates here (up until release), but we'll be moving to a private-tester model soon. If you're interested, just join the discord server and request to be added to the private testers list. We do nearly daily builds there, so if you like the game, and love playing the latest changes, definitely check out the discord server.

There will probably be some other things that get thrown in there as well, as is usually the case. Anyway, I'm crazy excited to get started on unit abilities and the tech tree; they're really going to change the game.

I wanted to give a very warm thank you to everyone who's left comments, played the game, or joined the discord. So, from me, to all of you, know that I appreciate all the good vibes you've given me, and that I'm putting that energy right back into the project. Lets make 2022 a great year :) 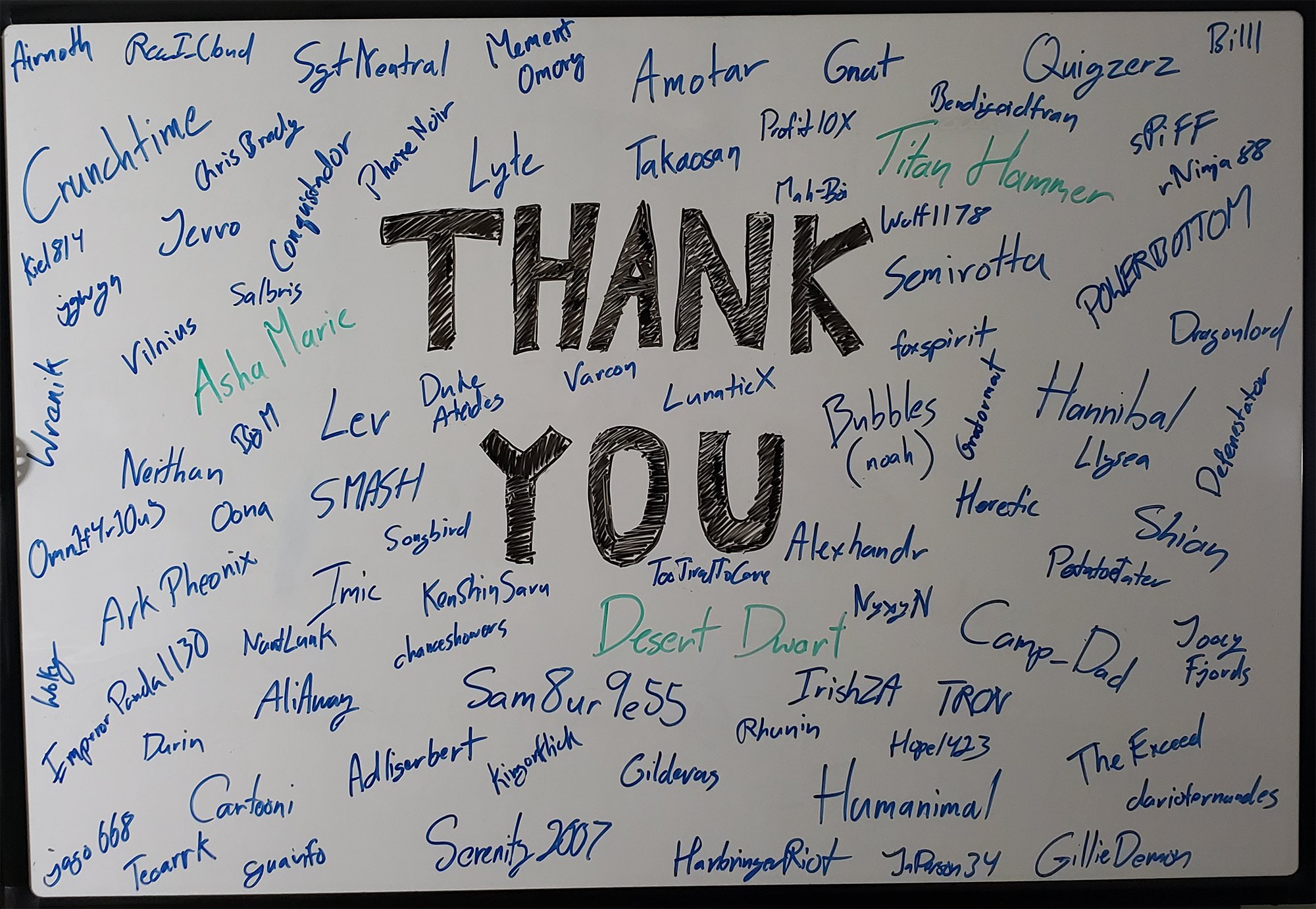